Eng. Razan Zuayter, APN Chairman of the Board, participated with various and effective contributions during the virtual Senior Officers Meeting held by Food and Agriculture Organization of the United Nations (FAO), over the span of four days (from 10 to 13 January 2022). Over 300 participants attended the meeting run by Mr. Abdul Hakim Al-Waer, the Regional Representative of the Near East and North Africa in the FAO, and Dr. Mithaq Abdul-Hussein the Technical Undersecretary of the Iraqi Ministry of Agriculture.

This meeting was a preparatory step for the 36th Regional Conference of the Food and Agriculture Organization for the Near East (NERC 36), in hopes of sharing and discussing different views both the participants and representatives from East and North African countries had regarding achieving sustainable development goals for improving agricultural and food systems, supporting innovation, empowering women and supporting gender equality and rural transformation, promoting food security and healthy diets for all, and building resilient agro-food systems to cope with multiple stresses.

Throughout her contributional comments, Zuayter stressed the importance of intensifying attention to biosafety at the level of Arab countries and placing it on the list of priorities to confront the risks of genetically modified foods.

Zuayter considered that conflicts in the region are the major catastrophe in regards to FAO's report on hunger, and called for a search for the root cause behind these conflicts, to try to find a solution to them instead of just supporting steadfastness, in addition to calling for relief programs to avoid the role of the fueler of conflicts and to work to strengthen food systems to control hunger and support small farmers.

Zuayter also praised the steps that support the involvement of civil society in setting priorities, planning, implementation and monitoring to build the capacity of civil society organizations and build a strategy that includes institutional communication. In return, she called for peoples protection from research and innovations funded by dominating companies that serve their own programs and interests.

In a detailed discussion related to water scarcity in the region, Zuayter said: "We believe that analyzing the problems of water scarcity in the region in all its aspects with transparency, and searching for the root cause contributing to this scarcity will help in solving the problem" referring to the example of Jordan and Palestine being affected by the policies of the Israeli occupation in dealing with water sources in the region and its role in affecting the share of the Jordanian and Palestinian per capita of water.

Some practical solutions that Zuayter recommended include; encouraging water harvesting strategies, supporting capacity building for water management to reduce water loss, in addition to encouraging support for regional water and agricultural integration strategies, which is the most successful solution for facing water scarcity.

In her response to the fear of addressing the political aspects, Zuayter stressed that food security is at the heart of politics, and encouraged increasing engagement when discussing principles of dialogue as well as relying on ratified international documents, laws and agreements, to confront the causes of food insecurity in protracted crises.

Zuayters significant contributions were applauded by Mr. Abdul Hakim Al-Waer, the Assistant Director-General and Regional Representative for the Near East and North Africa in the Food and Agriculture Organization of FAO, as he praised the role of both APN and Arab Network for Food Sovereignty in strengthening the position of civil society on pivotal issues that affect its future and food security. 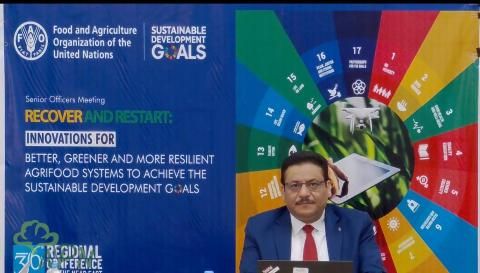 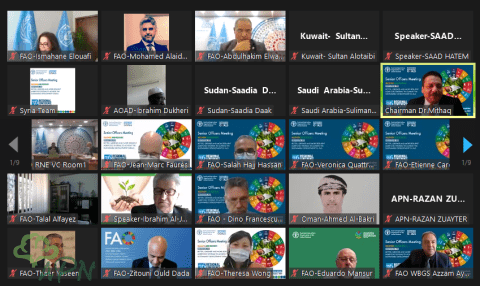