In response to the marginalization of peoples’ voices at the UN Food Systems Summit, APN and partners organize an international webinar on food security in the context of war, occupation, and sanctions

Hundreds of experts from around the world participated in the webinar organized by the Arab Network for Food Sovereignty, the Arab Group for the Protection of Nature, and their partners. The webinar 'The People's Track to Food Security, Genuine Development and Just Peace' was organized as a response to the marginalization of peoples and affected communities by the Summit United Nations Food Systems 2021 (UN-FSS).

The webinar focused on Action Track 5 of the Food Systems Summit that will be held in September of this year, which deals with conflict-born issues in our food systems. Case studies were presented on the impact of conflict on food production and consumption, the use of food as a weapon, and the relationship between food aid and liberalisation.

During her introduction to the webinar, Razan Zuayter, President of the the Arab Network for Food Sovereignty indicated that the voice of people affected by these conflicts is completely absent from the agenda of the UN Food Summit. She also said that the issues of wars, occupation, and militarization, which are the primary causes of hunger, is omitted from the list of topics, stressing that there is no real political will to achieve just, equal, equitable, healthy, and sustainable food systems in terms of looking at the root causes of conflicts and addressing them.

Zuayter said that after three years of negotiations, global civil society completed the 'Framework for Action for Food Security and Nutrition in Protracted Crises' to achieve justice for societies that live in the shadow of wars and conflicts. However,  the Food Systems Summit Systems has set it aside to start again from scratch, which shows a lack of will to reach real solutions that embody the aspirations of marginalized communities and small-scale farmers.

More than ten speakers at the webinar conveyed their messages to the UN Food Summit, demanding full respect for the rights of people to have control over their food systems. Most of the speakers recommended strengthening global solidarity in the face of increasing violations against small-scale farmers and indigenous people, such as the Palestinian people and also called for a shift in current agricultural and food models. They also noted that various crises have proven that local systems are resilient. They called on governments to allocate special units to work on food security in partnership with organizations and farmers and concluded that sovereignty over food is the only and coherent principle that provides solutions to problems related to food in the world.

Speakers warned against the attempts of major companies to exclude civil society organizations from participating in any visions or aspirations related to food systems, noting that these companies dictate the systems that suit them at the expense of local systems and farmers.

Speakers at the webinar include: Sylvia Malari - Co-Chair of People's Coalition on Food Sovereignty, Mariam Al-Jaajaa - General Manager at the Arab Group for the Protection of Nature, Hala Murad - President of Dibeen Association for Environmental Development, Danny David - Vice-President of La Federacion Campesina/Venezuela, Azra Sayeed - Executive Director, Roots for Equity/ International Alliance of Women/ Pakistan, Gertrude Kinyangi - CEO of Support for Women in Agriculture and Environment (SWAGEN)/Uganda,  Ramon Madruga- Director of Center for the Study of the International Economy/Cuba, Beverly Longid - Co-Chair of the Working Group on Conflict and Fragility (CPDE), Algandaro Barrios - Coordinator of the People's Coalition on Food Sovereignty in Latin America, Wafi Ibrahim - Journalist and Researcher/Lebanon.

The webinar was co-organised by the People's Coalition on Food Sovereignty (PCFS), the Working Group on Conflict and Fragility CPDE), the Dibeen Association for Environmental Development, Support for Women in Agriculture and Environment (SWAGEN), and Roots for Equity. 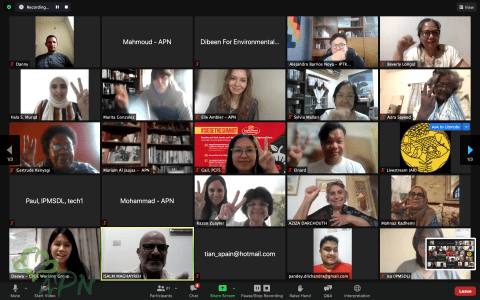 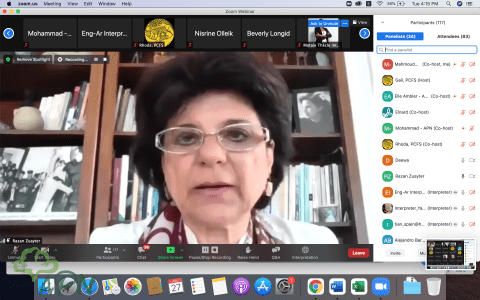 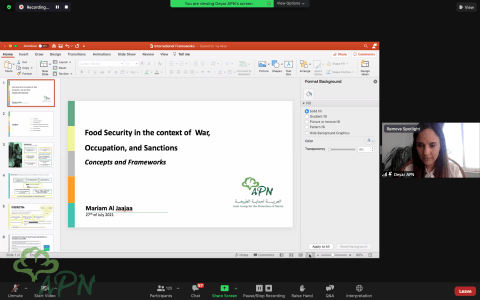 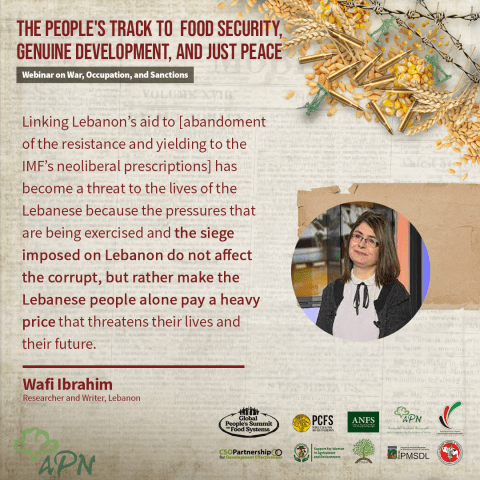 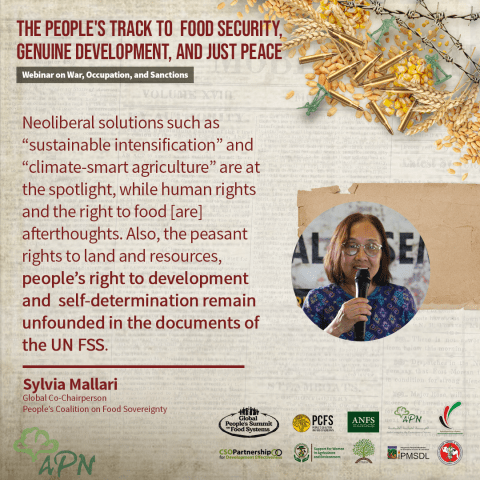 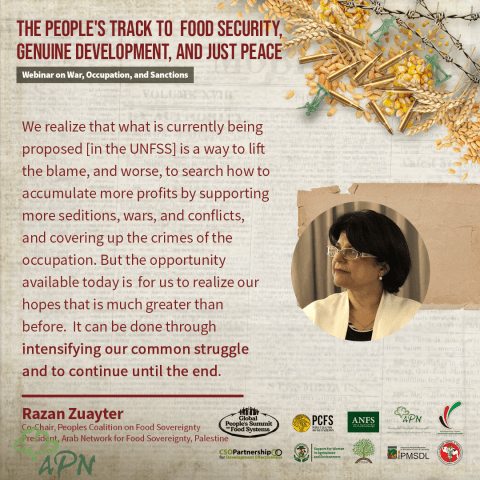 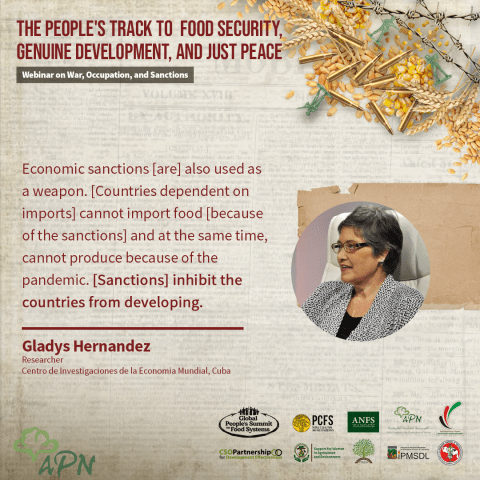 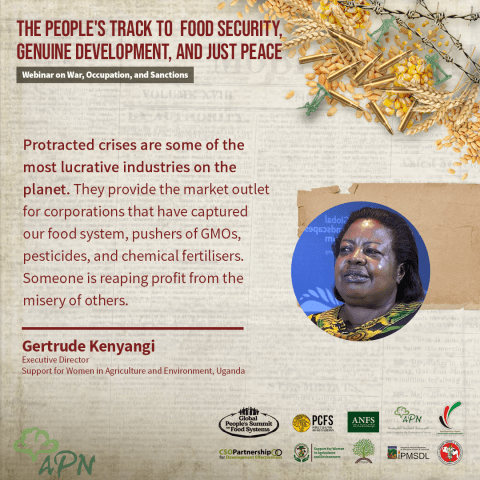 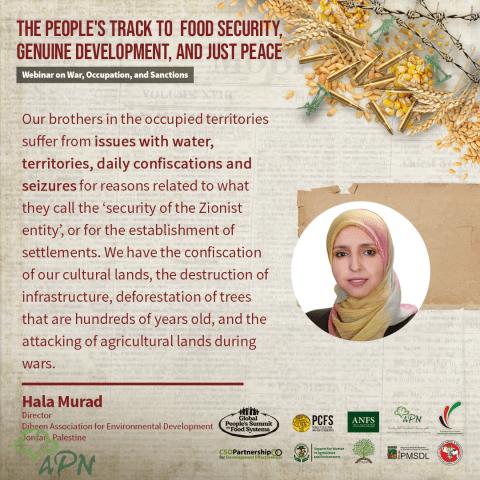 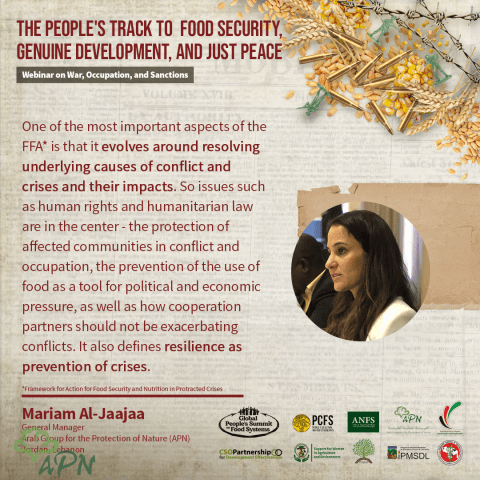 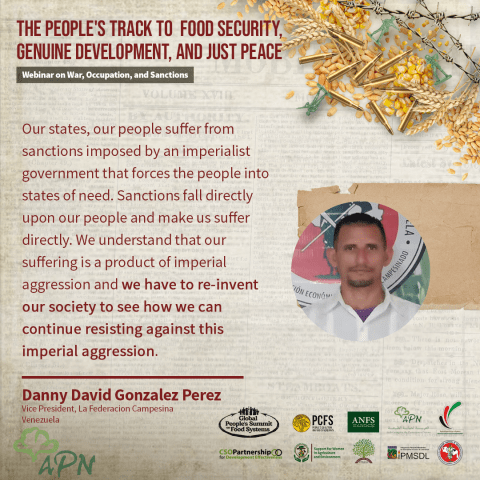 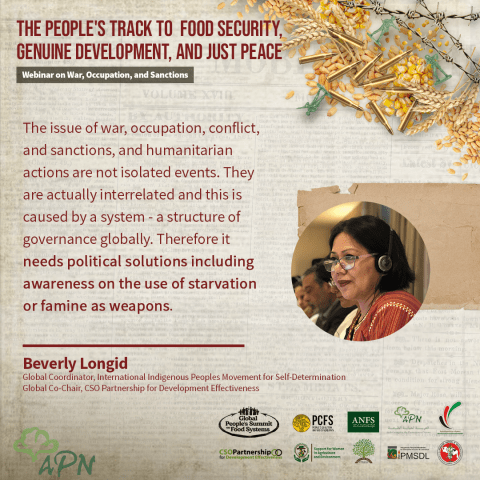 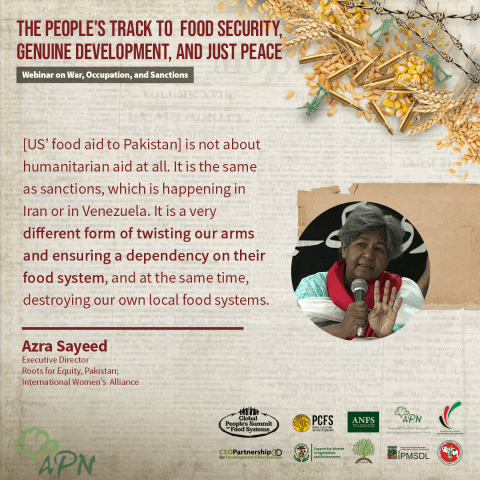 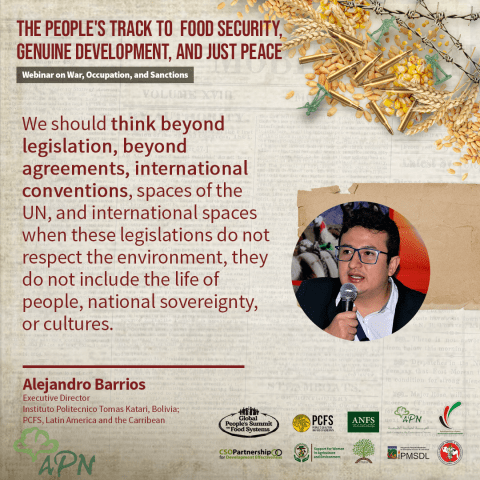 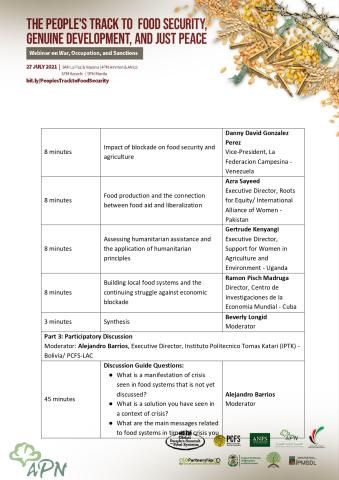 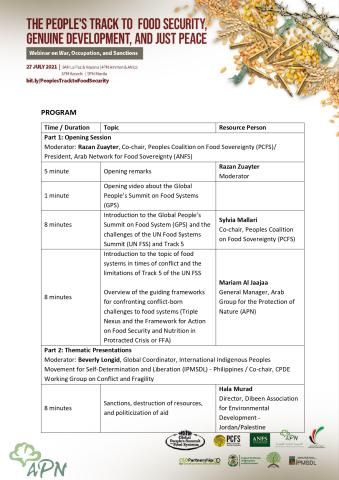 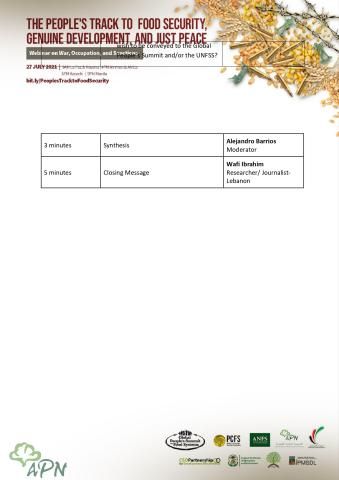