ANFS, APN and their international partners organize the Global People's Summit on Food Systems Coinciding with the United Nations summit

In an exceptional event that witnessed wide interaction and participation by hundreds of elite and academic figures and agricultural organizations in the world. Arab Network for Food Sovereignty and The Arab Group for the Protection of Nature made important interventions during the Global People's Summit on Food Systems. The summit was organized by Peoples' Coalition on Food Sovereignty (PCFS) along with a group of international organizations, including APN and ANFS, over a period of three days (21-23 September 2021).

Coinciding with the United Nations Summit (UN - FSS) The People's Summit was held, in response to the UN summit for ignoring the aspirations of the world's smallholder farmers.

In her opening speech of the People's Summit, Razan Zuayter, President of the Arab Network for Food Sovereignty and co-chair of Peoples' Coalition on Food Sovereignty, asked, "Who decides the future of food systems?” Its producers who are farmers, peasants, agricultural workers, fishermen, shepherds, youth, women, the poor and the hungry, and everyone who considers land and seeds to be the source of life and not a commercial commodity, or big corporations, regimes and governments that starve people and commodify the land, wage destructive wars and militarize food and water, and make huge profits through monopoly and colonialism? ".

The summit organizers had warned in a previous seminar at the margin of the summit against attempts by large profit-seeking companies to eliminate civil organizations from participating in any vision or perception of food systems, noting to the fact that the UN summit gives way to a lot of space for those companies which aim to dictate policies that suit them at the expense of local systems and farmers.

Zuayter showed that the “New York Summit” hijacked the title of the popular summit, making it their conference’s title as well, disapprovingly saying: “How could it be a popular summit – as the UN summit claims –, and the people’s representatives were not consulted, whether in setting priorities, organization, or content, and not even in inviting civil society and social movements to organize a corresponding conference as usual?”

For her part, Mariam al-Jaajaa, General Manager of APN shed light on the situation of food security in countries living through crises, conflicts, or wars. She pointed to APN’s efforts in leading the global civil society to accomplish “the framework to face the lack of food security in the face of protracted crises” after three years of negotiation which back then did justice to societies living through wars and conflicts and was approved by the Committee on World Food Security (CFS). However, the UN Food Systems summit surpassed that.

She presented a detailed report about the webinar held by “APN”, “ANFS” and a group of international partners on 27/7 titled “The People's Track to Food Security, Genuine Development and Just Peace”, which was part of the events opposing the (UN - FSS) summit. The webinar showcased problems and violations caused by the summit, as well as the recommendations of the participants and their conclusions.

She presented, while hosted for the second time during the popular summit, a proposal on the million trees project in Palestine as a forefront project to establish the principle of food sovereignty. It is a practical and great example of supporting the food system and empowering small farmers.

It is mentioned that there are real worries that the UN is establishing a food system that is unjust, inequality, unhealthy, and unsustainable, which is consistent with the global monopoly policy in agricultural production and trade, aiming to seize international lands and cause environmental destruction for profit. 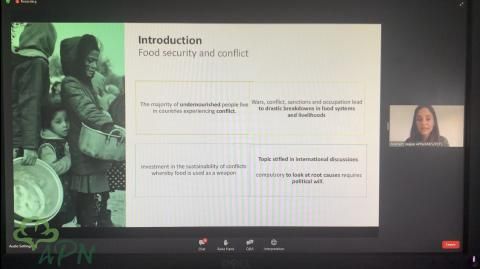 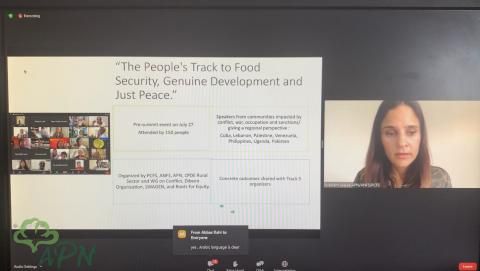